Today is my photoshop day. Since I switched on this laptop, I've been using my photoshop cs3 nonstop. I got so many stuff to do. One from B2R taking request thread, one from soompi secret santa and another one for soompi battle. At this time, I finished doing B2R's members request. They requested for a wallpaper and icons. This is the wallpaper that I made for her,

He's BEAST's Hyunseung. You know, I love BEAST! They are my bias after 2PM <3 and Hyunseung is one of my bias in BEAST (haha, actually I don't know who is my BEAST bias). I like the pictures the she have provided because the pictures made me to like Hyunseung more since he looks so gorgeous in the pictures. I like his kind-of-blonde-semi-curly hair~

And these are icons that I made for another requester at B2R. I don't really like the icons actually since most of them didn't blend well with the textures and they are really simple. But, in other point, I kinda like the icons,hihihi.

Anyway, currently I'm having a colorization battle with Rina and Shazana at soompi. It is my second colorization battle after a battle between me and Rina early this year. We just finished our third round within 5 days since we start it. Currently waiting for the 4th round picture from Rina. This is the thread for our battle. Do stalk the thread and leave some feedbacks. 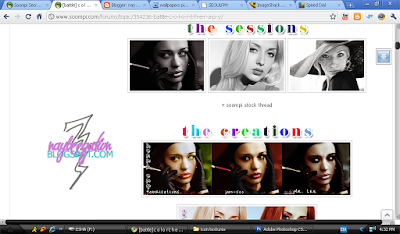 Posted by Unknown at 08:40
Email ThisBlogThis!Share to TwitterShare to FacebookShare to Pinterest
Labels: graphics, personal